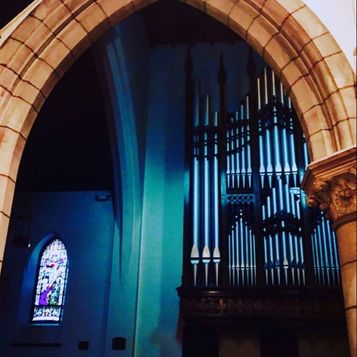 The beautiful organ at Emmanuel has a unique history. In September 1988, during Emmanuel's Jubilee campaign to update and restore the church, the vestry agreed to the purchase and installation of a 33-stop, 39-rank organ.  (Stop list available at the bottom of this page.) The Schlicker Organ Company of Buffalo, New York was selected to build the instrument, described in the contract as "a two-manual and pedal organ in a hardwood case...designed for congregational singing and choral accompaniment...located on the side of the church projecting out from the wall in order to disperse sound evenly to the choir and congregation."

It was agreed that the new pipe organ would be delivered and installed by August 1991, in time to allow for a series of recitals by distinguished organists during Emmanuel's Jubilee Year.  However, the organ company's near bankruptcy put the completion of an organ for Emmanuel in serious question. To ensure that the work already underway would continue, Emmanuel advanced money beyond the stipulations of the contract.

The result was a successful one. The Schlicker Company remained solvent under new management, and the organ was completed. The craftsmen who worked to complete the organ sent a congratulatory, individually signed card in October 1991, with the inscription: "Without Emmanuel Church's faith in and willingness to continue with the Schlicker firm, we would all be out of work." Because of that "faith," they concluded, "we will pay particular attention to your instrument."

The organ installers arrived in May 1992, and a dedication recital by Bruce Neswick followed.  In 2017, the organ celebrated its 25th anniversary. In the intervening years it has sounded not only at Sunday and feast day Masses, but also in recitals by local and national artists, orchestral concerts, and 1662 Evensongs. Thanks both to regular parishioner giving and to the Noel Organ Concert Fund, Emmanuel is committed to strong support both for maintaining our organ, and for making sure it is featured regularly in worship and performance.